The company VTS Verbindungs Technischer Service oHG was founded on 1st January in 1987. Since that time the company is a member of the companionship of precision mechanics and electronics. Also registered in the german commercial register VTS holds a membership in the chamber of industry and commerce. For more than 35 years founder and chair man Ulrich Schildknecht gained experience in the segment of rivet technology. Before he became self-dependant he had operated as technical supervisor at the british company "Bifurcated Engineering" being responsible for planning and general management as well as commercial procuration.

Since 1972 he had significant influence in developing the innovative "STANZNIETVERFAHREN" mainly in Bifurcated's Headquarters BT+R in Aylesbury/UK. Since its foundation the company VTS oHG developed constantly. In the meantime junior chair man Ole Schildknecht has joined the executive suite to tie in with constant growth and success of VTS. At the beginning the production of rivet machines was realized in a hired hall, but in August 1988 already the location moved into a new building in commercial area of Henstedt-Ulzburg, nearby the city of Hamburg. 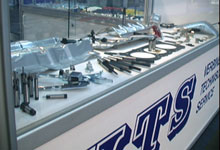 To adopt to fast expandation and growth of VTS this building has been extended several times. Range of products contains manufacturing and distribution of fully automatic self-piercing riveting machines and special constructions, as well as the equivalent rivet tools and rivets.

Type 150-2/ 50.4 has been developed to set small and beyond quadratic semi-tubular rivets – that means head diameter is bigger than length of the pole - fast and reliable....

The Type 300-4/ 100.10 has been developed to especially set self-piercing rivets fast and reliable.Consequently built as single modules VTS Machines can easily be integrated as components within customized assembly...